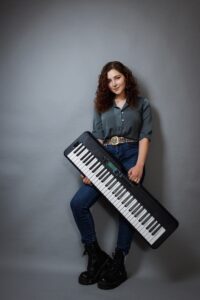 Hey! I’m a playwright, composer, and a 2020 graduate of Northwestern University. My original musicals, Painting Faye Salvez and Noise, have received readings and workshops at The Tank, the New York Musical Festival (NYMF), the Library at the Public Theater, Tuacahn Theatre’s New Works Festival, Emerging Artists Theatre’s New Work Series, Common Ground Theatre Company, and The Chicago Dramatists Guild. Favorite spots where my music has been performed include 54 Below, The Greenroom 42, the York Theatre’s New Works Concert, Titchfield Festival Theatre (UK), and Under the Arch Incubator’s New Work Cabaret (featuring the national touring cast of The Band’s Visit!). I’m also excited to have joined the BMI Workshop this year!

I was psyched to join the Women & Theatre Project as a guest on an episode of their podcast! Give the episode a listen or take a look at the transcript here.

DROP ME A LINE!